The History of Ragged Schools in Angel Meadow 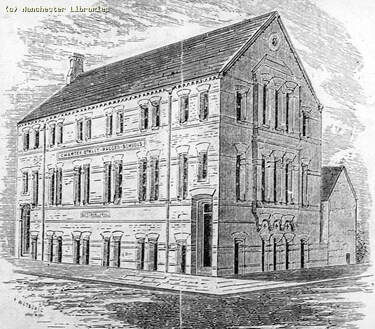 The Eros fountain in Piccadilly is a monument to his work. Today the Ragged School Charity is known as Liveability.

The Ragged Schools provided Sunday school teaching, basic education, food and clothing to children who were too "ragged" to go to normal Sunday schools and church services. Children attended from the age of 5 until they were 13. 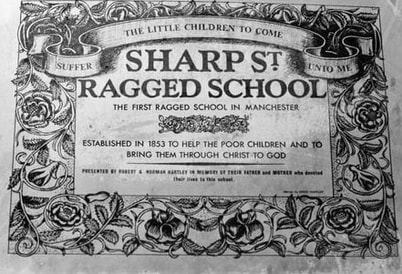 Ragged schools were mainly run on non-denominational lines by evangelical groups. Charles Dickens commented that these schools were "not sufficiently secular, presenting too many religious mysteries and difficulties, to minds not sufficiently prepared for their reception"
Further reading on the Ragged School Movement can be found here.
Due to the rapid industrialisation and urbanisation in Britain, and in particular Manchester, there was a need for the support structure given by Ragged Schools.

Adults were also helped with literacy classes and free meals. They were encouraged to stay out of the pubs and beer houses, which were numerous in the area of Angel Meadow, by signing the pledge and being members of the Band of Hope. 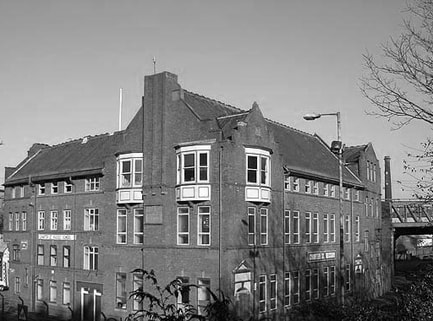 Charter Street Ragged School
The Charter Street School opened in 1861. It was set up on the site of the first Juvenile & Industrial School in Manchester which had opened 1 January 1847.
The former Industrial School had become a dancing saloon "of the lowest class" and "a meeting house for thieves and prostitutes" with gaudy decorations. In 1862, the Chartered Street School felt compelled to buy the building so as not to have to compete with the saloon.
The School initially worked with the Cotton Famine Relief Committee to help people who were affected by over production of textiles, and the disruption of imported baled cotton because of the American Civil War.
The existing building was started in 1866 and extended in 1891 and 1900. It was renamed Charter Street Ragged School and Working Girls Home in 1892 by Lord Shaftesbury. The building also offered poor relief including "food, clogs & clothing for children, and a Sunday breakfast for destitute men and women; medical services were also provided."
The school rewarded good behaviour and attendance with annual trips to Lytham with as many as 1000 children making the journey from nearby Victoria Station. Whit Walks to outlying town and suburbs were also popular.
Charter Street tried to help a wider range of people in the community via the Working Girls Home, which provided safe accommodation (with bathrooms) for young girls who would be vulnerable to groomers.
The School also helped elderly people, who either had trouble receiving parish assistance or problems in qualifying for the old age pension when it was introduced in 1908.

Following post-war decline of the area and the demolition of slum-housing the building gradually became less used.

However, today the building still accommodates an evangelical Primary School, a Community Dance School and provides food & clothing to the needy through the Charity Lifeshare 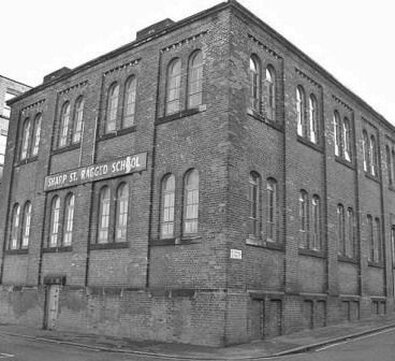 Sharp Street Ragged School
This School was established 1853 by philanthropist and evangelical Christian Christopher Sharp. It is believed that he was descended from John Sharp who had set up the extant St. George's Road (now Rochdale Road) Methodist Church and after who the street was already named.
According to Banks' map of 1844 a previous Sunday school had operated on the site.
The current building dates from 1869. The ground floor was for the reception class where "wild and subdued children" were separated. The curriculum was of a very basic nature - the teaching of simple arithmetic, writing and reading, along with Bible-based religious and moral instruction.
In 1940, the Sharp Street school was bombed - although the stoic people who ran it still went ahead with the Christmas Treat for the children. In the post war years Sharp Street had strong connections with the cast of Coronation Street and actress Violet Carson, who played Ena Sharples, became President of the school. This was an example of life imitating art as her character was a caretaker in a mission hall just like Sharp Street school.
In 1961, the minutes report changes in demographics in the area with only three houses still standing in the vicinity of the school. However, the 1976/77 report highlighted that the School was fulfilling a need to help tackle delinquency in the form of muggings and football hooligans, and highlights how "they didn't have the excuse of starvation to motivate them into crime like their Victorian counterparts". The building is now Grade II listed and operates as "independent offices and creative spaces".
Both schools met with resistance when they first started, from people with a vested interest in keeping the population of Angel Meadow ignorant and in want. The archives highlight that one group of people offered a higher rent for the original Sharp Street building to try to price out the school.

In October 2014 FOAM presented a talk on "The Ragged Schools of Angel Meadow" for the Ragged University Project.
Thanks to Sarah and the Archives Team at Manchester Central Library, William Kenneth Jones and FOAM members past and present.
The research compiled for that talk can be found here.